Since returning to the state of Ohio in the summer of 2014, the Cavaliers have been in a position to compete for a championship every single year. Starting with young Kyrie Irving already in place, trading for All-Star forward Kevin Love and adding LeBron James back to the roster, and the Cavs were ready-made contenders at the top of the Eastern Conference immediately.

Add to those facts there is the matter of no team in the Eastern Conference with a sizable advantage over the Cavs in this time span, nor have they been seriously threatened to be overtaken as conference champions.

Today may be a different story albeit, even if not by much. The Cavs have had their share of troubles this season with injuries to key players such as Kevin Love, contributing players MIA such as Tristian Thompson, newly signed Kendrick Perkins has yet to make an impact and a huge roster turnover mid-season which brought in inexperienced younger players who are expected to perform on the same level as the past few years.

Defensive troubles have also plagued the Cavs this year more than ever seemingly not being able to consistently find a comfortable spot, yet they aren’t totally out of the race.

Oddsmakers have taken all of these things into account this season, and for the first time since James’ return, the Cavs are not projected to win the East surprisingly, due to the high level of play by the Toronto Raptors.

The Raptors themselves have had their own challenges in the past and have never been able to take their game to the next level, but this year of changes for them seems to at this time give them an advantage, at least in the eyes of the oddsmakers.

Courtesy of Bovada, this is the first time since LeBron James went back to Cleveland that the Cavaliers are not favored to come out of the East. Odds to win title: Golden State 21/20, Houston 8/5, Toronto 17/2, Cleveland 9/1, Philadelphia 14/1. Nobody else is lower than 40/1.

We’ve heard the talk all year long, and although the Western Conference teams are not surprising, the new guesstimate that the Raptors have a better shot to win the East this season is at least concerning considering the above notes, but that doesn’t mean things will fall that way.

The best player in the game still resides in the Land donning the Wine and Gold, and because of that one advantage no one else has, there is always an opportunity to win. 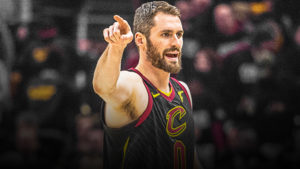