Kevin Love’s days with the Cleveland Cavaliers may not be numbered after all, as according to Chris Fedor of Cleveland.com, the Cavs still have nothing percolating on the Love trade front.

We are about 24 hours from the NBA trade deadline. Multiple sources continue to describe a #Cavs trade of Kevin Love as “highly unlikely” and Cleveland’s stance on his value hasn’t changed

Love has career averages of 18.2 points and 11.2 rebounds with the Minnesota Timberwolves and Cavs. If Cleveland doesn’t trade him at the deadline, they will likely try again in the summer. 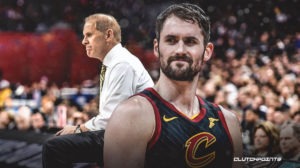