Sir’Dominic Pointer inked to a 10-day deal by Cavs

In what will be their sixth call-up of the season, the Cavs have decided to sign Sir’Dominic Pointer of the Canton Charge to a 10-day contract.

Chris Fedor of cleveland.com reported news of Pointer’s deal with the Cavs on Wednesday afternoon. Notably, the 6-6 wing was in action with the Charge that same morning, scoring 12 points, seven rebounds, four steals and four blocks in a 108-106 double-overtime victory over the Wisconisn Herd (Milwaukee Bucks affiliate).

#Cavs are signing Sir’Dominic Pointer of the Canton Charge to a 10-day contract today, league sources tell @clevelanddotcom. Pointer actually played for Charge in this morning’s game. A 6-foot-6 wing averaging 12.1 points with Canton, he’s the sixth callup from Canton this year

Sir’Dominic is more than just an interesting name. He’s actually a solid player, especially on the defensive end of the floor.

The Cavs have struggled to find a rhythm this season, as their 17-44 overall record can attest. Shortly after the All-Star break, John Beilein decided to step down as head coach. As a result, J.B. Bickerstaff was elevated to the position.

Exactly when Pointer will be available for action with the Cavs is not clear at this point. Cleveland will serve as hosts to the Boston Celtics on Wednesday night. Tip-off inside Rocket Mortgage Fieldhouse is set for 7:00 p.m. ET. 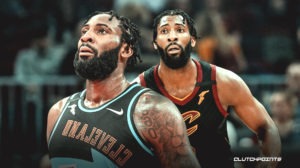