Sam Dekker is throwing shade at one of his new teammates and an old rival in Larry Nance Jr. Well, not really. He’s joking, but Dekker took to Twitter to call his new teammate, “the dirtiest dude in the league.”

Obviously, Dekker is poking fun at Nance for posting an image of the two getting tangled up during a game when they played for the Lakers and Clippers.

Excited to get out the #TheLand and play with the dirtiest dude in the league. But for real, couldn’t be more excited for the opportunity. I’m more than ready. pic.twitter.com/94uRRDUuEA

Dekker also mentions how excited he is for the opportunity in Cleveland. The Wisconsin native has yet to live up to the expectations of his first round selection by the Houston Rockets in 2015. He’s yet to carve out a significant role in a rotation during his short career.

But perhaps Dekker can follow in Nance’s footsteps and elevate his game in Cleveland. Nance’s numbers in LA and Cleveland last season were very similar, but Cleveland loved the energy and spark that Nance brought every time he was on the floor.

While the Cavs try to find their identity without LeBron James, they’ll need guys like Nance and Dekker to inject a shot of life into the team.

The expectations for the Cavs next season are low, but they have enough young talent on the roster to surprise a few people. If guys like Nance and Dekker can take the next step in their careers, Cleveland may be better than most are predicting.

Although Sam Dekker is already calling out his new teammate, it looks like they’re both happy he’s on his way to Cleveland. 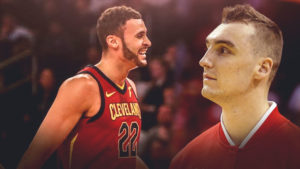