Rodney Hood listed as doubtful vs. Wizards with toe sprain Per the NBA’s official injury report, Cleveland Cavaliers shooting guard Rodney Hood is listed as “doubtful” against the Washington Wizards after suffering a right toe sprain against the Sacramento Kings on Friday. Hood only played 15 minutes against the Kings, tallying four points (1-3 shooting from the field) and one assist before exiting the game in the second quarter.

He wouldn’t return after halftime.

A lanky wing with a streaky jump shot, Hood has been one of Cleveland’s most intelligent playmakers and has been a consistent communicator on the defensive end. Though he’s not an elite athlete or shot-creator, the 26-year-old has been doing a better job of using his length and his jumper to be a two-way player.

If Hood is out, there will be an uptick in minutes and possibly a starting role for shooting guard Alec Burks. Burks, who has averaged 14.4 points, 5.6 rebounds, 3.0 assists and 1.0 steal in 28.0 minutes per game since being traded to Cleveland, had a near triple-double against the Kings with 22 points (8-14 shooting from the field, 3-6 from three-point range), nine assists and seven rebounds in 38 minutes.

With his latest performance, the aggressive playmaker has tallied at least 13 points in four of the five games he’s played with the Cavs. 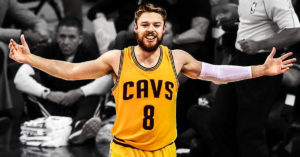 JUST IN: The underrated value of the Matthew Dellavedova trade
Related TopicsCavsRodney Hood