Cavs shooting guards Rodney Hood and Alec Burks have developed a unique friendship over the course of their careers in the NBA. The two players once served as teammates with the Utah Jazz and now they’re together again — this time with the Wine and Gold.

In a recent interview with Joe Vardon of The Athletic, Hood would discuss Utah’s decision to let him go in a season when he was supposed to be the team’s go-to player:

“It’s just a business,” said Hood, 26. “They (the Jazz) decided to make a change. We had some good times there. I’m pretty sure they appreciated us there. Now we’re not there. They’re doing good, we’re doing good. Still in the NBA and we just move on. I stopped trying to reach for why things happen. Just move on from it.”

Burks, who was traded to the Cavs for Kyle Korver earlier this season, still has a lot of respect for Hood and appreciates the way he has acted towards him since they’ve met:

“That’s my guy,” Burks said of Hood. “He’s shown me nothing but love since I’ve been here and since I’ve known him from Utah.”

The Cavs (6-21 and 4th in the Central Division standings) are struggling through the early stages of this season, to say the least. Despite that fact, Hood says it’s nice to have his old friend around through these trying times.

“It’s great, man,” Hood said. “We’re going through tough times, and to go through it with somebody that you know and you’ve been with since you’ve been in the league, it always helps.”

Along with rookie point guard Collin Sexton, Hood and Burks have become primary options on the offensive end of the floor for Cleveland.

The Cavs will be back in action on Wednesday night, as they’re scheduled to host the New York Knicks. 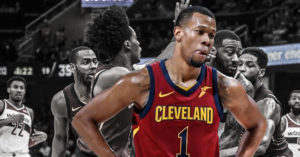 JUST IN: Rodney Hood admits it’s tough to enjoy season when ‘you’re getting your head beat in pretty much every night’
Related TopicsAlec BurksCavaliersRodney Hood