There were a lot of people doubting that the Cleveland Cavaliers can get the job done against the Boston Celtics in Game 7. Everything seemed to be stacked against them or so it seemed. The Celtics were perfect at home coming into the game, and the Cavs had struggled on the road, especially during the series.

As much doubt as there was, one guy didn’t lose hope. Former Cavs fan favorite Richard Jefferson posted on Snapchat a goofy face along with the text “never a doubt.”

Must've missed this from last night. Richard Jefferson posted this on his Snapchat after the #Cavs win over the #Celtics in Game 7. #WhateverItTakes #NBAFinals pic.twitter.com/0TeSg6aPMq

The one thing that most people tend to forget is that the Cavs have LeBron James, and although early in his career he wasn’t considered clutch, that isn’t the case anymore.

It seems when the moment is brightest, that’s when The King performs the best, and in Game 7, that was the case again.

He played 48 minutes putting up 35 points, 15 rebounds, and nine assists. For the second game in a row, he missed a triple-double by one assist. James also never lost faith in his teammates which would have been easy to do after their struggles in the first half.

“Every possession is its own challenge. As much as I was passing in the first half any my guys weren’t knocking them down, I believed in the second half they would,” he told ESPN’s Doris Burke during the trophy presentation. “I believed that the Celtics would try to put as many bodies on me, in front of me, and invite the pass to my guys, and dare my guys to shoot and make. I just kept the faith in them, and they did that.” 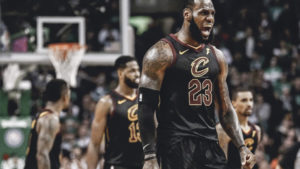