The moment Kyrie Irving requested a trade from the Cleveland Cavaliers, it sent shockwaves throughout the entire NBA.

There was confusion as to why Irving wanted to leave and whether or not it had to do with LeBron James. It turned out that Irving wanted his own team, and also just a change of scenery after being drafted to the Cavaliers all those years ago.

Among those confused by Irving’s decision was the entire Cavaliers team. No one knew about how Irving was feeling, which is the reason the other Cavaliers players were surprised, per Jay King of MassLive.com.

Richard Jefferson on Kyrie Irving asking out of Cleveland: "I think everyone was surprised. … That's why it was such big news. There were no grumblings about him being unhappy."

Jefferson is one of the team’s veterans and has been around the NBA for a long time on multiple teams. He’s seen a thing or two in terms of players getting traded. Despite that, even this one caught Jefferson by surprise.

It wasn’t just the Cavaliers. Everyone was taken aback by the news. But usually, if a player is unhappy, there’s at least one person somewhere within the organization who either knows about it has a good sense of the situation.

But that was not the case with Irving. He kept his feelings to himself and swiped the rug from under not only his teammates but the entire Cavaliers organization, which was eventually forced to trade him to the Celtics.

It appears that Irving is happy in Boston now, and the Cavaliers obviously got Isaiah Thomas in exchange for Irving. So both teams still have talented players.

But the way things went down in Cleveland isn’t the best look for Irving. Hopefully, he gets what he’s looking for with the Celtics. 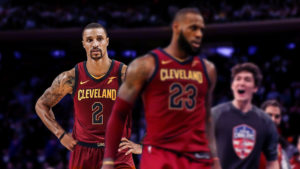