Former Cleveland Cavaliers forward Richard Jefferson is tired of the questions relating to LeBron James’ free agency, and with only two days left before the Cavs star makes the impending decision of opting in or out of the last year of his contract, Jefferson is cutting all ties.

Always the playful poet, Jefferson released a quick update in his Snapchat account, cutting ties with James (temporarily) to put to rest any potential media outlets looking to him for a scoop or an indication of James’ free agency decision.

“It is with great remorse that I am writing this. After many years as a peer and many years as friend and teammate I have decided to end my friendship with Lebron James. I am saying this publicly so that the fans and media members can please stop asking me where he is going in free agency. I don’t know, my family doesn’t know and neither do my kids .. Unfortunately I live in Los Angeles so the questions are unavoidable but hopefully this helps to clear things up. Truth be told I never liked the guy. He works too hard it makes the rest of us look bad. He’s my son’s favorite player and I view that as a complete betrayal of how hard I’ve worked to put a roof over his head. I’m sorry I’m having to give this “Drake” response but I feel like this is the best way to address this issue that I’m clearly losing also.”

“I wish everyone the best of luck in free agency .. Teams and Players. Oh and [obscene gesture] to Channing Frye also … just because!”

Again, in case you somehow could not figure it out, Jefferson was joking around. Cavs fans can, for now, relax. 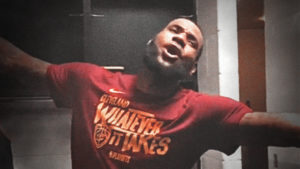