A lot has happened since the Cleveland Cavaliers’ historic title run back in 2016 that saw the Cavs take down a 73-win Golden State Warriors team in a classic seven game series.

Led by LeBron James, Kyrie Irving, and Kevin Love, the Cavs came back from a 3-1 deficit to stun the Warriors in Game 7 to win the franchise’s first ever championship. However, the Dubs made a bold move a month later by signing superstar Kevin Durant. Both squads would meet two more times in the Finals after that, with the Cavs simply having no answer for the revamped Bay Area team.

A lot of fans saw the Warriors’ move to bring in Durant as weak, and former Cavs forward Richard Jefferson also sees it that way. While he was doing commentary during the Cavs’ game against the San Antonio Spurs earlier today, he can’t help but criticize Golden State for signing Durant in the aftermath of their 2016 Finals loss.

Richard Jefferson criticizes the Warriors for not running it back after the 2016 Finals: “They were like, ‘We’re gonna go get our big brother’” pic.twitter.com/NfqKRmTuOx

To be fair, the Cavs were also a different team heading into the 2016-17 season. They traded All-Star guard Kyrie Irving to the Boston Celtics for Isaiah Thomas — who they traded to the Los Angeles Lakers midway into that season. They also brought guys like Dwyane Wade and Derrick Rose, but they never really had a chance to shine.

Cleveland ended up relying heavily on LeBron James the next two seasons.

But what the Warriors did back in the summer of 2016 is more of preserving their dominance’s longevity rather than a long-term fix. They’re on the cusp of winning a third straight title this season, while the Cavs are left to rebuild following LeBron’s decision to join the Lakers last summer. 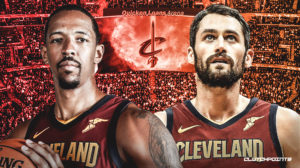