Quicken Loans CEO Jay Farner provided an update on Cavs owner Dan Gilbert, who was recently hospitalized after experiencing stroke-like symptoms. Though it will take some time to fully recover, Farner says Gilbert is taking the challenge head on.

“Dan’s recovery is a process that will take time – but we are all confident he will meet this challenge head on as he always does,” Farner told Sam Amico of Amicohoops.net.

According to a report from ESPN’s Adrian Wojnarowski, Gilbert received immediate medical attention after experiencing the symptoms of a stroke. The 57-year-old businessman has been comfortably recovering since:

“Early this morning, Dan Gilbert sought care at a local hospital after experiencing stroke-like symptoms,” Quicken Loans said in a statement via ESPN. “He received immediate medical attention and is currently recovering comfortably. Our collective thoughts and prayers are with Dan for a speedy recovery. The Gilbert family respectfully requests privacy at this time.”

Gilbert has owned the Cavs since 2005 and is the founder of Quicken Loans. He has numerous business ventures in both Ohio and Michigan. Under his direction, the Cavs made five NBA Finals appearances, winning the city’s first NBA title in 2016.

News of Gilbert’s hospitalization came just days after the Cavs announced that John Beilein would be the team’s next head coach. Beilein, who served 12 successful seasons with the University of Michigan, will be trying his hand in the pros as a play-caller for the first time.

Join us in wishing Gilbert a speedy recovery. 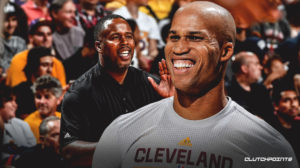 JUST IN: Richard Jefferson jokes that Damon Jones deserved to get soup thrown on him
Related TopicsCavaliersDan Gilbert