Though these three players didn’t hear their names called on Thursday night, they will be looking to make a name for themselves with the Cavs.

Booth, now 23 years of age, played four seasons with the Villanova Wildcats, where he won a pair of NCAA championships and a First-Team All-Big East selection. Though his time was limited in his redshirted junior year due to knee pain, the Baltimore native managed to bounce back in his senior season, averaging 18.6 points, 3.9 rebounds, and 3.8 assists per game. By the end of his stint with the Wildcats, he was the ninth player in the school’s history to record 1,500 points and 300 assists.

According to a report from Shams Charania of The Athletic, Booth will join the Cavs’ Summer League team:

Wade, 22, spent four seasons at Kansas State. His stats improved with each passing year, but it was the effort he put forth in his junior season that drew interest from a lot of NBA teams. After his breakout junior season (16.2 points and 6.2 rebounds per game), Wade earned first-team All-Big 12 accolades.

Chris Haynes of Yahoo Sports reports that Wade and the Cavs have agreed to the terms of a two-way deal:

Undrafted forward Dean Wade out of Kansas State has agreed to a two-way contract with the Cleveland Cavaliers, league sources tell Yahoo Sports.

Coming out of DeSoto High School in Texas, Scout.com ranked Bolden 8th among all high school prospect. The Dallas native went on to play three seasons at Duke under head coach Mike Krzyzewski. And though he missed the first eight games of his freshman year due to a leg injury, it quickly became evident that Bolden had a solid presence in the paint. However, he was playing behind some other great players at Duke, including Zion Williamson, R.J. Barrett and Cam Reddish. As a junior (2018-19), Bolden played in 35 games with the Blue Devils (21 starts), averaging 5.3 points, 4.5 rebounds and 1.7 blocks in 19.1 minutes per game.

After going undrafted, Duke big man Marques Bolden has signed with the Cleveland Cavaliers, according to source.

Now that the 2019 NBA Draft is in the rearview mirror, newly-appointed head coach John Beilein can begin teaching his new players the sets he would like to deploy in the coming season. Patience will be a virtue, to be sure, but if anyone can get these young guys to perform, it’s Beilein. 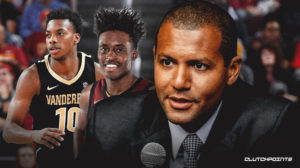