No one in Cavs organization has been tested for coronavirus

Cleveland Cavaliers head coach JB Bickerstaff says he hasn’t been tested for the coronavirus. In fact, no one in the Cavs organization has, per Chris Fedor of Cleveland.com.

All of the Cavs players are healthy and asymptomatic, so there’s no need to get tested for COVID-19:

“I don’t feel any effects. My kids are good. My wife is good. I feel like the people who need the test should use the test and they should be the ones getting tested,” Bickerstaff said.

“At this point, I’m comfortable with where we are and the steps that we have taken to protect ourselves.”

The Cavs, though, did go 5-6 under Bickerstaff, who replaced John Beilein. Cleveland has already given Bickerstaff an extension, so it’s clear the Cavs players like him a lot more than Beilein.

NBA owners are hopeful of resuming the 2019-20 season in the summer or fall if the coronavirus dies down. The Cavs were headed for the lottery again.

Whenever the 2020 offseason starts, Cleveland could be busy. The Cavs could try and trade All-Star power forward Kevin Love again after failing to move him at the trade deadline. 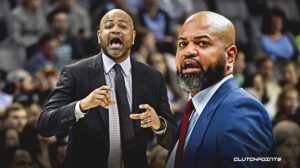