Collin Sexton struggled with ball distribution at times throughout the 2018-19 campaign, but Nik Stauskas believes newly-appointed Cavs head coach John Beilein will be able to help with that issue.

Stauskas played under Beilein’s direction at the Universiry of Michigan, which means the two are very familiar with one another.

“This is going to be great for Collin,” Stauskas told cleveland.com. “I just think this offense is going to allow Collin to have much more space to operate. There’s going to be opportunities for him to get easy buckets without having to go one-on-one and really work for his shots. Now he’s going to realize, ‘If I set up my defender the right way, with some of these cuts, I can get two easy layups per game.’ He’s going to realize he doesn’t have to go coast-to-coast and go through four guys and finish through contact to get a bucket. He can set the defender up the right way and use the space to his advantage to get easy layups or help with the playmaking ability.

“I think with how much film he’s going to watch and how much Coach Beilein is going to make him study the game, he’s going to start seeing different things on the court. It won’t be, ‘OK I have to score every time.’ It’s going to be like, ‘What’s the right play and how do I get my teammates involved?’ I think that’s something Coach Beilein can definitely help him with — that floor general, playmaking side of things. I think it can open up a whole new part of his game.”

Earlier this week, Beilein noted that Sexton is one of the main reasons he decided to leave the Wolverines after 12 successful seasons to join the Cavs. Contrary to what others have said in the past, Beilein believes in Sexton’s ability to play the point guard position.

Perhaps Beilein’s style of coaching will indeed suit Sexton. After all, Beilein revolutionized several collegiate programs with his pace and space formats. And while it’s not clear what sort of playbook he’ll keep with the Cavs, there is a good chance he’ll get the most out of his players, including Sexton. 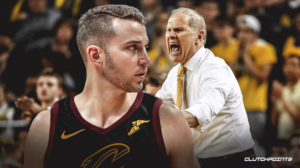