Carmelo Anthony is still a member of the Houston Rockets, shockingly enough, and there is some speculation that the Cleveland Cavaliers could be a potential landing spot for the aging superstar.

Sam Amico of Amico Hoops spoke with two NBA general managers and one scout about the possibility of Anthony landing in Cleveland:

GM No. 1: “I’d look into it. They could pump some life into the building. Say what you will about Carmelo, he is a (big) name. Mostly, though, I think the Rockets are interested in J.R. Smith. If the Cavs were willing to take on Carmelo, I bet they could unload J.R.”

GM No. 2: “No way, no how. Carmelo is at the end of his career. This is a reason no one wants to make a deal for him. He is not the right kind of player to be around young guys. He will want the ball and his shots. He is a good person, don’t get me wrong. But he is not a good fit for that franchise.”

Scout: “It depends. I know the Rockets have interest in J.R. Smith. You could always include Carmelo in a deal then waive him. But I don’t see the harm in keeping him. Why not? Who else do you have on that team that will be there beyond this season? (Collin) Sexton? (Cedi) Osman? There’s maybe five, six guys. … Put it this way, if it means unloading Smith I would do it.

“You can give Carmelo a shot and if it doesn’t work out, that’d be on him. I don’t think he wants to get waived again. He might play hard and enjoy himself, like Derrick Rose is doing (with the Minnesota Timberwolves).”

Anthony hasn’t played a game for the Rockets since Nov. 8 and his tenure with Houston lasted a laughably brief 10 games.

The Rockets figured out quickly that Anthony did not fit what they were trying to do and they decided to exile him until they could find a suitable trading partner.

Of course, Houston’s drastic turnaround was about much more than Anthony, but it was clear that Melo was not the same type of player he was a few years ago.

Cleveland could make sense for Anthony this season because the Cavs are completely out of things and the former superstar would bring some juice into the building. 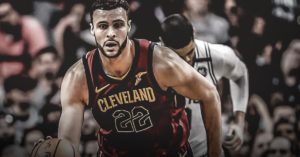