The party occurred after the ESPYs in Los Angeles club Delilah, where cameras and phones were not allowed. The Athletic’s Marcus Thompson II wrote about the scuffle, containing more details about the encounter between the two rivals.

None of the attendees expected the on-the-court drama to flare back up in this setting.

Which is why everyone was stunned when Thompson, according to sources, out of nowhere attacked Green.

No argument. No squaring up. No taking it outside.

“It was a sucker punch,” said one source who attended the party. “But, to be honest, it wasn’t really a punch. It was more like a shove.”

It was a face mush, another source described it. Other reports have described it as a legit punch, maybe even a quick one-two.

Whatever it was, Green was incensed, according to the sources.

To recall, Green and Thompson had a scuffle in Game 1 of last season’s NBA Finals. Thompson got thrown out of the game for his antics. And during the Warriors’ championship parade, Green added more fuel to the fire:

According to witnesses, LeBron James and Kevin Durant had to break up the commotion involving Thompson and Green. 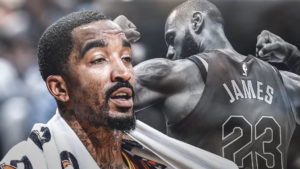