Although the 2017-18 NBA season is still in progress, several cities around the United States (and beyond in some cases) are coming up with creative ways to lure LeBron James, who has the option to become a free agent shortly after the playoffs.

The most common means of conveying a message to LeBron has been via billboard. A handful of cities, including Los Angeles, New York City and Philadelphia, are openly taking part in a pursuit of the King.

One of the more recent billboards to spring up comes from the LeHigh Valley IronPigs — a baseball team that serves as a Triple-A affiliate for the Philadelphia Phillies. Their “pitch,” as they say, is a bit different, though. The IronPigs suggest that LeBron needs to spend a season in Minor League baseball if he really wants to “catch MJ.”

If @KingJames really wants to catch MJ, he needs to spend a season in Minor League Baseball.

James has been on an absolute tear this season, especially in the playoffs. Through the first two rounds of this postseason (11 games), the Kid from Akron has racked up averages of 34.3 points on 55.3 percent shooting from the field (28.8 percent from beyond the arc), 9.4 rebounds, 9.0 assists, 1.5 steals and 1.0 blocks in 41.4 minutes per.

There is something to be said about the impact James can have on a city and its surrounding neighborhoods — both on and off the court. Take Cleveland, a city that has seen tremendous financial growth as a result of the James effect, for example. Simply put, having James on your team is a good thing in many ways.

At this point, there is no one on Kyrie Irving’s flat Earth who knows James’ intentions. Despite that fact, it seems LeBron-related billboards will continue to spring up around the country. 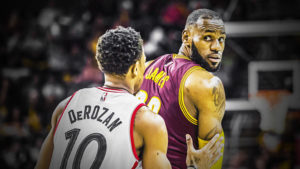