Cavs will meet with Miles Bridges In less than a week’s time, Koby Altman, and co. will have to make a crucial decision on the Cleveland Cavaliers’ No.8 pick in the NBA Draft. The options are aplenty but LeBron James’ hanging status makes it all the more complicated. They could use the pick or trade it for a more established star. While the latter will be more of an option when assuming James stays, the Cavs are doing their due diligence by giving their prospects a solid look each. Now, it’s Miles Bridges’ turn to impress the reigning East champs.

According to Fear The Sword’s Chris Manning:

Per a source, Miles Bridges is in Cleveland to meet with the Cavs. Landed tonight, meeting with the team tomorrow.

Among the names the Cavs have given a look are Collin Sexton, who’s rumored to be a favorite of James’ camp, Michael Porter Jr., and Wendell Carter. Meanwhile, Bridges himself is a no-nonsense player. An athletic wing who has the build to body up against shooting guards, small forwards, and some power forwards, Bridges projects to be a great source of energy off the Cavs’ bench.

He finished his sophomore season at Michigan State under Tom Izzo with averages of 17.1 points, 7.0 rebounds, and 2.7 assists per game. Majority owner Dan Gilbert once passed up on the opportunity to draft Izzo’s guy in Draymond Green who turned out to be pretty good, it’ll be interesting to know how he will react if he receives another call from the Spartans coach. 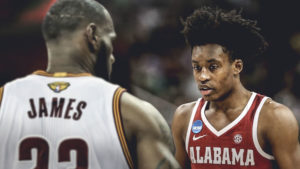