Cleveland Cavaliers point guard Matthew Dellavedova will not play Wednesday evening against the Charlotte Hornets due to a knee injury, according to Joe Vardon of the Athletic. Jordan Clarkson, however, will return to the lineup after missing the team’s last game with back soreness.

Dellavedova has appeared in five games with the Cavs since being traded back to Cleveland from the Milwaukee Bucks in early December, averaging 11.8 points, 2.4 rebounds, 4.6 assists, and 2.2 three-pointers per game on 56.8 percent shooting from the field and 52.4 percent from beyond the arc in just 20 minutes per game.

Going up against Kemba Walker, the Cavs surely would’ve liked to have the physical and tenacious defender in Dellavedova available to put some pressure on Walker. Dellavedova will forever be a Cleveland legend for his 2015 NBA Finals performance in the wake of Kyrie Irving’s season-ending knee fracture. With both Irving and Kevin Love out, Dellavedova stepped up his game offensively as the secondary scorer behind LeBron James while also earning himself the brief nickname “Steph-stopper” as he forced Golden State Warriors guard Stephen Curry into a couple of rough shooting games that resulted in Cavs victories.

Following the Cavs’ championship the following year, Dellavedova joined the Bucks on a lucrative, multi-year deal while also signing a shoe contract with Peak.

The sixth year guard out of Australia was traded back to the Cavs along with John Henson in a deal that also sent George Hill and Jason Smith to the Bucks as well as Sam Dekker to the Wizards.

Dellavedova’s next chance to make his return from injury will come on Friday when the Cavs visit the Toronto Raptors. 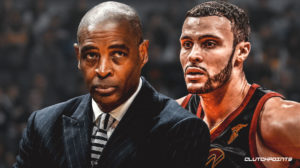