Cleveland Cavaliers point guard Matthew Dellavedova seems to have been working hard on his jump shot during the offseason, and the results have been showing.

The 28-year-old was recently caught on film taking a few long-distance jumpers during warm-ups of the Australian national team. The new and improved shot, as well as the much quicker release is actually looking very sharp.

Interesting sight when watching the Boomers warm up: getting a close look at Matthew Dellavedova’s renovated jump shot. Release has really sped up. pic.twitter.com/afyhFXXNH3

Dellavedova’s release is not at the Stephen Curry level, but the improvement is indeed noticeable. Hopefully, this pays off for the 6-foot-4 guard coming into the new season.

Last year, Dellavedova embarked on his second stretch with the Cavs following a mid-season trade from the Milwaukee Bucks. In 36 appearances for Cleveland, the former Saint Mary’s College of California standout logged 7.3 points, 1.9 rebounds, and 4.2 assists in 19.9 minutes of the Cavaliers bench. He also drained 1.1 three-pointers per contest on a 33.6-percent clip.

The 2019-20 season will be an important year for Dellavedova, with his current deal expiring at the end of this campaign. He is expected to pocket $9.6 million in the final year of his four-season deal, which he signed with the Bucks back in 2016.

There has been no word if Cleveland intend to offer an extension to Dellavedova, so the six-year veteran might end up entering free agency in the summer. Depending on how he fares in the coming season, this could turn out to be a good thing for Delly, with the free agency class of 2020 shaping up to be a bit shallow. 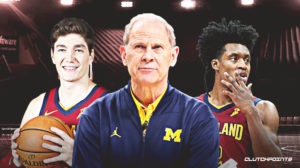 JUST IN: Cleveland Cavaliers: 3 Cavs facing the most pressure in 2019-20
Related TopicsCavaliersCavsMatthew Dellavedova