When LeBron James drove the length of the court and hit the buzzer beater on Saturday night to put the Toronto Raptors on the brink of elimination he once again shocked the NBA world. Even though James made the shot look easy, it was a difficult shot that not many people could make, especially with the type of pressure that was on his shoulders.

One guy who wasn’t shocked by what James did was his son, LeBron James Jr., who was on the court celebrating after his dad hit another clutch shot.

“It’s normal,” Junior said when I asked what he thinks when James Sr. makes those career-defining shots via Joe Vardon of Cleveland.com.

Coming out of the timeout before James hit the buzzer beater it was assumed that the Cleveland Cavaliers would take the ball out at midcourt. Instead, they took it out on the baseline which gave James enough head of steam to blow past the Raptors and hit the shot.

James said in his postgame press conference that he practices every type of shot all the time, so when it gets to this situation it isn’t surprising that he has such a high success rate of making them.

“What you come to find out as his teammate and playing with him is that he practices those shots all the time and makes them all the time,” Kevin Love said. 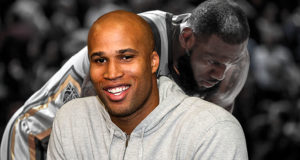