One day, when LeBron James decides to hang em’ up, there will be several books written about the life and times of his career. There will certainly be loads of topics to discuss in these books, but the King says his own copy will have a lengthy chapter about the Golden State Warriors.

“I don’t know where they’ll fall in my book, but they will have a nice chapter,” James said during Media Day.

Four: the number of consecutive meetings between the Warriors and James-led Cavaliers.

It’s a feat unprecedented in NBA history. No two teams have met on the NBA’s biggest stage four seasons in a row.

“How meaningful is this series with you and your career?” ESPN’s Chris Haynes asked James. “How do you view them?”

(brief pause) “And then they added Kevin Durant,” James said. “So what does that do to them? It makes them even more dangerous — even more powerful, and great.

“For me, as a competitor, it’s fun,” James continued. “It’s truly fun. And to know when I’m done playing the game of basketball, to know that I played against some of the greatest teams that’s ever played… and (the Warriors) are one of them.”

As most hoops fans know, the Cavs and Warriors are no strangers, with Golden State holding a 2-1 advantage in their last three Finals meetings.

“You look at it, they’ve got four Hall of Famers on their team in Klay (Thompson), Dray (Draymond Green), Steph (Curry) and KD (Kevin Durant),” James said. “And they’ve got a Finals MVP that comes off their bench (Andre Iguodala).”

.@KingJames says the @warriors will have a "nice chapter" in a hypothetical book about his career. 📚#NBAFinals pic.twitter.com/AVDWiFr4Ed

James and the Cavs are heavy underdogs in this series, according to most accounts, and the road to reaching this point has been long and arduous for both teams — maybe more-so for Cleveland. However, here they both are, ready to meet in battle once more.

100: The number of games LeBron James has played this season (all 82 in the regular season).

Thursday night’s Game 1 matchup is set to tip inside Oracle Arena at 9:00 p.m. EST with ABC having live broadcast coverage. Will James and the Cavs be able to even this series up, perhaps altering the ending of this tale? Only time will tell. 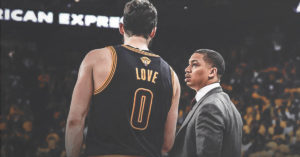 JUST IN: Tyronn Lue will not bring Kevin Love off the bench, when available
Related TopicsCavaliersLeBron JamesWarriors