The Cleveland Cavaliers have a huge summer ahead of them, and many are wondering if they witnessed LeBron James’ final game as a member of the Cavs. His time in Northeast Ohio will easily be most remembered for the 2016 NBA Championship he helped bring, but if you ask James what he thinks his greatest achievement in life would be, he’d tell you it’s something else.

In a pre-production meeting with ESPN’s broadcasting trio of Mike Breen, Jeff Van Gundy, and Mark Jackson before the start of the 2018 NBA Finals, James said his greatest achievement would be playing at the same time as his son.

“You want to ask me what would be the greatest achievement of my life? If I was on the court at the same time as my son in the NBA,” James said. “That would be No. 1 in my lifetime as an NBA player.”

Bronny is set to enter high school next year, and the current NBA rules state that players have to be one year removed from high school in order to be NBA eligible. James has already envisioned what that would look like if he could stay in the NBA for another five years for his 20th season.

“I thought about it because my son is about to be 14 and he might be able to get in [the NBA] a little early,” James said.

“And play together?” Mike Breen inquired.

“Or play against,” James responded.

James will now be considering his next destination in free agency, which could be Los Angeles, Philadelphia, or even home in Cleveland. Rumor has it, however, that his family and their comfortability will play a huge part in his decision. 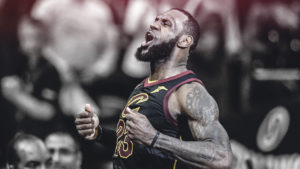