Cavs news: LeBron James praises the women of the WNBA

Over Labor Day weekend, Cleveland Cavaliers superstar LeBron James made a trip to the Philippines — his third such visit to the beautiful Southeast Asian archipelago. In his previous two stops in Manila, James was mostly an on-court performer for adoring fans at the famous Mall of Asia Arena. This time, however, “the King,” as he is internationally known, dished out a personalized training session for a group of female basketball players.

After running several drills with the girls, James answered a few questions from reporters who were gathered in the gym. In his discussion with Migs Bustos of ABS-CBN Sports+Action, the three-time champion praised some of the WNBA’s brightest stars for their inspirational roles in the lives of young women around the world.

“Now, just watching Diana Taurasi and watching Sue Bird, watching Elena Delle Donne, just to name a few – those are some great inspirations,” James said. “Those are some great players who will inspire the next female baller that will come up and play, so I appreciate what they do.”

James, now 32 years of age and entering his 15th season in the NBA, has always given respect to the women in his life, especially his wife and mother. Raising a child in the Springhill projects of Akron, Ohio is no small undertaking for a single parent. However, Gloria, James’ mother, did her best to provide for their family.

“She’s the true definition of what it means to be a woman,” James said of his mother.

In his closing statement, James revealed that the women in his life are what keeps his motor revving at full song on a regular basis.

“To incorporate my wife and my daughter, they give me so much energy to just go out and play for them. I use their passion and their energy every single day,” James said. “It’s great to have those three women, along with my mother-in-law and my sister-in-law as well, giving me that passion.”

“I’ve got so many women in my corner who just give me a lot of strength.”

Strength? Sure, James has loads of that. His strength doesn’t always come from weights and barbells, though. Most of the time, it comes from his family. 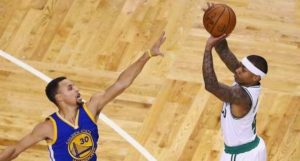