If you grew up in the 90’s or early 2000’s, there’s a good chance you caught at least one of Jim Carrey’s films. From his early days with In Living Color to his first leading role in Ace Ventura: Pet Detective, the Canadian-American actor, comedian, and producer has continuously blessed the airwaves with humor.

While his on-screen brilliance is evident, there is one aspect of Carrey’s personality that movie buffs may not be aware of: his affinity for painting. On Sunday, Carrey released I Need Color, a fantastic six minute mini-documentary in which he explains his path to canvas.

“When I really started painting a lot, I had become so obsessed that there was nowhere to move in my home,” Carrey continued. “Paintings were everywhere, they were becoming part of the furniture, I was eating on them. I found myself looking around at one point at a really bleak winter in New York, and it was just so depressing. And I think I needed color.”

Did anyone else know what a talented artist Jim Carrey is? I had no idea. pic.twitter.com/JAV4BmbLJR

Like many others, Cleveland Cavaliers superstar LeBron James was surprised when he saw Carrey’s inspirational video. The King, a man who is known to be a connoisseur of all things art and music, sent out a personalized message on Twitter to praise Carrey’s talent.

This is incredible!! I had no idea either. Unbelievable work @JimCarrey! Would love to see some of your work in person some day! Love art. https://t.co/7jX0RfSAP3

Staying true to his comedic form, Carrey politely replied to James’ message with a spot of humor.

Thx 4 ur kind words @KingJames.I'd be honored 2 hang with u any time.Can u imagine 2 King James' in the same room?Sss'make it happen! ?;^•} 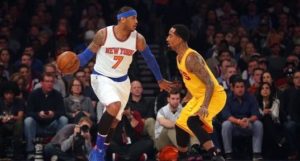