Video: LeBron James gets poked in the eye by Brandon Ingram 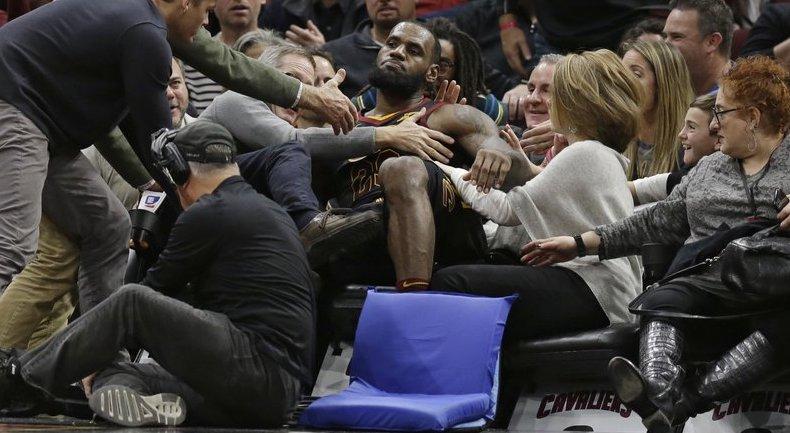 Early in Thursday night’s game between the Cleveland Cavaliers and the Los Angeles Lakers at the Quicken Loans Arena, LeBron James’ fans and his fantasy owners held their breathes collectively when the four-time MVP went down on the floor after going for a layup — his first attempt of the ballgame.

James drove down the lane and attempted a layup against Lakers forward Brandon Ingram. He turned his back to create separation between the ball and Ingram, but the Lakers’ second-year swingman’s reach was just so long he didn’t just bother James’ shot – he also hit him in the face, poking The King’s eye.

LeBron James wasn’t able to run down on defense immediately, as it took him some time to get up and check on himself. Fortunately for the Cavs superstar, he didn’t suffer anything serious. In fact, he was still able to guide the Cavs to a 121-112 victory, notching another triple-double in the process. James finished the game with scintillating numbers of 25 points, 12 rebounds, and 12 assists, his 59th career triple-double. His season averages now read 28.1 points, 8.3 rebounds, and 9.1 assists per game.

After repulsing Brandon Ingram and the Lakers, LeBron James and the Cavs now set their sight on extending their win streak to four games this Saturday, when the Utah Jazz pay Cleveland a visit.