Even LeBron James — the leader and the face of the Cleveland Cavaliers franchise, doubted the Cavs’ chances of making it to the playoffs.

As reported by Brian Windhorst of ESPN, James opened up to Rachel Nichols, narrating the team’s struggles early on. The struggles James was referring to was when they suffered a 28-point loss in Minnesota, a 34-point loss in Toronto, and the game where they allowed the Oklahoma City Thunder to score 148 points on them at home.

“It was at points where, ‘OK, will the Cavs even make the playoffs?’ ” James told ESPN’s Rachel Nichols on Wednesday in an exclusive interview. “And I was like, ‘OK, I am not settling for that conversation — now that is just ridiculous. Now I have got to get into the postseason.’ “

To recall, the Cavaliers looked good in the first month of the season, even without then-Cleveland player Isaiah Thomas, who was nursing a hip injury.

Yet come December and January, it started to go downhill for the Cavaliers. The defense was completely nonexistent. Right after a defensive breakdown, the Cavs players would cast out ugly looks at one another. Blaming the nearest teammate while rolling their eyes.

Despite all they have gone through, they managed to power their way to the playoffs. Now, they are back in the NBA Finals. James revealed what inspired him to flip the switch:

“You have so many people looking up to you, you have so many kids to inspire and you, yourself, you have always talked about be as great as you can be every day, so I kind of hit that switch before the trade deadline.” 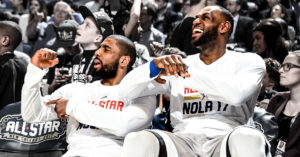