Indiana Pacers guard Lance Stephenson seems to enjoy aggravating Cleveland Cavaliers superstar LeBron James. The two players have been involved in several on-court incidents over the years, as most hoops fans know. For the most part, Stephenson’s attempts at getting inside the Cavs forward’s head have been futile, but that didn’t stop the former from rekindling the fire on Friday night.

During the fourth quarter of Friday night’s game, Stephenson actually poked James’ hip with his thumb in a rather strange manner. The King quickly pushed Lance away, which resulted in a technical foul.

James, who finished Friday’s game with 27 points on 11-of-25 shooting from the field (2-of-9 from beyond the arc), 11 assists, eight rebounds, three steals, and one block, spoke about his battles with Stephenson over the years during his post-game media availability.

“Lance is just a little dirty, that’s all,” James said after Friday’s 97-95 loss to the Indiana Pacers. “I mean, we’ve got a history, so I already know that. I should’ve known. I’ve known since school that it’s not the guy who tells the joke that gets called, it’s the guy who laughs. They called me on the retaliation, but he played well tonight.”

The Cavs, now losers in eight of their last 11 games, were up by as many as 22 points in the first quarter of Friday’s Pacers game. Needless to say, they’ll need to do a better job of holding leads. Their next shot at redemption comes on Monday night, as they’re scheduled for a matchup against the Golden State Warriors inside Quicken Loans Arena. Tip-off is set for 8:00 p.m. EST with TNT having live broadcast coverage. 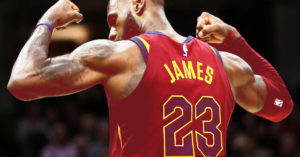 JUST IN: Cavs will face Warriors, Thunder, Spurs in three of their next four games
Related TopicsCavaliersLance StephensonLeBron JamesPacers