Thanks to his incredible performance in Friday night’s 130-122 road win over the Washington Wizards, Cleveland Cavaliers superstar LeBron James has etched his name in the NBA history books alongside former Los Angeles Lakers great Kobe Bryant in a rather unique statistical category.

James, now 32 years of age, joined Bryant as the only player in NBA history to score 50-plus points in their 15th season or later. In his 43 minutes of playing time on Friday night, the former No. 1 overall pick in the 2003 Draft posted 57 points on 22-of-34 shooting from the field (2-of-4 from beyond the three-point line), 11 rebounds, seven assists, three steals, and two blocks.

Over the last 50 seasons, LeBron & Kobe are the only players with 50 points in a game in their 15th season or later.

James had 24 points through the first half of Friday night’s game, but it was the second half in which he proved why he is still considered the greatest basketball player on Earth. In the third quarter, he racked up 14 points. His fourth quarter performance, which hearkened back to yesteryear, was truly a sight to behold. One-legged fall-away jumpers, relentless drives to the rack, and cheeky shoulder shrugs were in full effect. In the final 12 minutes of play, James posted 19 points, five rebounds, and four assists.

“That was my first time being a part of it on his side,” Crowder said of James’ 57-point performance against the Wizards.

"I've just gotta get comfortable. When I get comfortable, it'll come."@CJC9BOSS after playing his best game with the @cavs this. pic.twitter.com/9yz1bvAYwc

Coming into Friday night’s game, the Cavs had dropped four games straight. James, who recently admitted that he may not have been in the best shape due to the fact that he missed a portion of training camp with an ankle injury, told reporters that his conditioning is “right there.”

“Me being efficient is something I’ve always kind of harped on,” James told Fox Sports Ohio. “It’s not too many times I take over 30 shots, but you know, if I do it, I want to be very efficient at it.”

“You know, I’ve been working quite a bit on my turnaround and my fade-aways and my footwork and things of that nature,” James continued. “I was able to get to it. Once I fade, I really don’t see the defender as much. I just focus on the target. By me getting down and getting some layups, and-ones, and getting to the free-throw line, it definitely kept me in a good rhythm.”

“Every shot I took, I felt like it was going in,” James continued.

“I guess they figured I would miss at some point… and I did,” James said with a smile in conclusion. “I missed 11 shots.”

The Cavs, who are now carrying a 4-5 record, will be back in action on Sunday afternoon when they’ll host the Atlanta Hawks inside Quicken Loans Arena at 3:00 p.m. EST. Fox Sports Ohio and Fox Sports Southeast will have live broadcast coverage. Until then, have a go at James’ highlights from Friday night’s game. 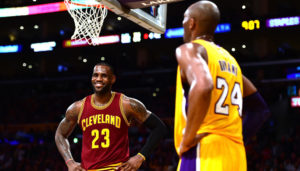