LeBron James on his injury scare in Game 6 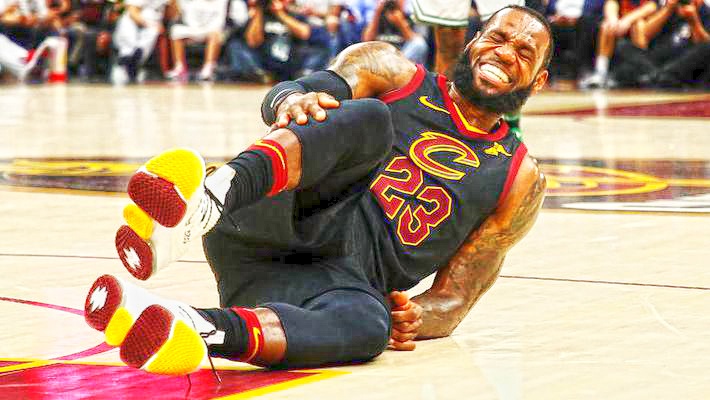 The Cleveland Cavaliers have already lost Kevin Love for the remainder of last night’s Game 6 after colliding with the Boston Celtics’ Jayson Tatum early in the contest, and the sight of LeBron James writhing in pain while down on the floor only added horror to fans inside Quicken Loans Arena.

The incident occurred in the fourth quarter when Larry Nance Jr. accidentally crashed on James’ leg in a move that would make Zaza Pachulia proud. After a few seconds of tension witnessing the Cavs’ main man holding his leg, the 6-foot-8 freak of nature decided that he was good to go.

“I just felt someone fall into my leg, and my leg kind of went in,” James said in a story by ESPN’s Dave McMenamin. “I felt some pain throughout my entire right side of my ankle into my leg. I was just hoping for the best, obviously, because I’ve seen so many different injuries, and watching basketball with that type of injury, someone fall into one’s leg standing straight up. Luckily, I was able to finish the game.”

James dusted off the pain and proceeded in handing out a good old whipping of the Celtics, finishing the game with 46 points, 11 rebounds, nine assists, and three steals to go along with a couple of clutch 3-pointers to weather a late rally by Boston.

The four-time MVP shared that there was no way he was checking out after the hit:

“Well, I wasn’t coming out in either case. Obviously, I would have had to literally have a real, real, really bad injury — [knocks on table] I don’t even know if this is … that’s not even wood; I’ll find some on the way out — to come off the floor with the opportunity we have to be able to force a Game 7,” James said.

There goes the worn-out narrative from critics of James on his fortitude to play through pain. While Love’s status for Game 7 is still up in the air, James’ approach toward the do-or-die game isn’t going to change. JUST IN: George Hill says his secret to good games is having Chipotle
Related TopicsCavaliersLeBron James