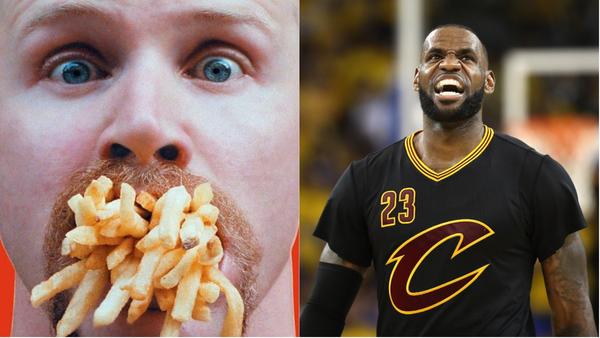 In partnership with Springhill Entertainment, filmmaker Morgan Spurlock (“Super Size Me”) is creating a new documentary about LeBron James’ “I Promise” school program.

According to a report from Tom Withers of The Associated Press, the documentary, which will chronicle James’ launch of a public school for children in his hometown of Akron, Ohio., is set to release next fall.

Filmmaker Morgan Spurlock ('Super Size Me") is teaming up with LeBron's group to produce a documentary on James' "I Promise" school in Akron slated to open next fall.

“Being able to create this school to specifically meet the needs of these kids and their families means everything to me,” James told variety.com. “There are so many kids and families struggling, and we want this school to be a safe, positive place that helps them stay on the right track to earning their educations. Having Spring Hill Entertainment and an amazing filmmaker like Morgan Spurlock here to document this process is huge.”

Maverick Carter, James’ long-time friend and CEO of Springhill Ent., says he is excited to share the inspiration that has come from the project.

“This is exactly the type of powerful, engaging, and uplifting story SpringHill Entertainment was created to tell,” Carter said. “To have such an acclaimed filmmaker like Morgan Spurlock as passionate about this project as we are really highlights the power of the life-changing work that’s happening in Akron. We hope this story will touch people in a way that inspires action in their own communities as well.”

Since its inception, James’ “I Promise” program has helped more than 1,200 students in the Akron area through mentoring and career advice. Those who complete the program are given the opportunity to earn a four-year college scholarship.

“What LeBron has accomplished on the court pales in comparison to the lasting effects he is having on the young people of Akron,” Spurlock said. “I am honored to be able to share this journey with him, as well as with parents, fans and teachers around the world.”