The Cleveland Cavaliers and the Golden State Warriors will meet once again in the NBA Finals.

There are plenty of storylines to be had in the fourth consecutive installment of the series. Among them is how tired the players on each of the teams are right now, especially given the fact that both teams just came off difficult seven-games series that went all the way.

But for the entire season, no one has played more minutes that LeBron James. In all, James has logged more than 600 more minutes than any player on the Warriors heading into the Finals series, per Anthony Slater of the Athletic.

The Cavaliers will need James at his best to even have a chance to beat the Warriors this year. They have less depth than years past, and James has to create everything on offense.

With that many more minutes on James’ odometer, rest will be a big storyline in the series. The Warriors like to play more players in their rotation, and for good reason.

But Tryon Lue’s rotation is down to about seven players now, and James plays the most out of them. He will have to find either more rest for James somehow, or other players will need to step up in the Finals. 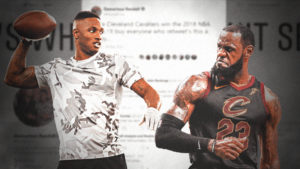 JUST IN: Browns player will buy jerseys for every retweet if Cavs win the title
Related TopicsCavaliersLeBron JamesWarriors