LeBron James has become the engine of a struggling Cleveland Cavaliers team. Even at 33 years of age, James has continually played phenomenal basketball for the Cavs this year. Against the Phoenix Suns on Tuesday, he recorded 28 points, 13 rebounds, and 11 assists in a 129-107 win for the visiting team.

This spectacular performance marked James’ 14th triple-double of the season — a career-high. When asked about his amazing performance, James immediately cited his ability to adapt and improve as the reason why he can perform at this level at his age, per ESPN’s Dave McMenamin.

“More possessions my ass. What are you talking about?” James said. “I’m getting better with age. That’s what it’s saying.”

James is usually a humble player, so it’s a bit surprising to hear him rant on about his abilities. Though, it’s about time that James receives more credit for his work. This year has been a disappointing season for the Cavs. After multiple injuries and roster inconsistency, James has been nothing but consistent and spectacular. If not for James, the Cavs would not even be in the postseason.

Nonetheless, the Cavs still have a long way to go if they are going to win their second championship. Regardless if James plays well, he is going to need his team to perform at the same level if Cleveland will have any chance at postseason success. Therefore, it’s a good thing that James is making known that his age won’t take his eyes from the greatest prize in the league, another NBA championship. 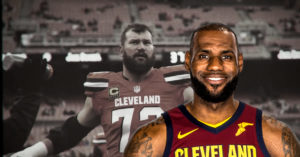