Former Cavs star LeBron James and his camp were reportedly “shocked” by David Griffin’s controversial comments on Thursday, according to Dave McMenamin of ESPN (h/t Joseph Zucker of Bleacher Report).

Griffin, who now works for the New Orleans Pelicans, said he was “miserable” working for the Cavs because “everything we did was so inorganic and unsustainable and, frankly, not fun.”

Griffin says the burden to build a championship roster around LeBron year after year was difficult. The new Pelicans’ architect also said James isn’t the same animal anymore after winning the 2016 championship. The Cavs became the first team in NBA history to erase a 3-1 series deficit in the Finals when they defeated the Golden State Warriors.

Cleveland went to the Finals the next two seasons, losing to the Warriors, who had Kevin Durant on the roster. Kyrie Irving requested a trade from the Cavs during the 2017 offseason. Cleveland traded Irving to the Boston Celtics, which James called the beginning of the end of his second tenure with the Cavs.

LeBron and David Griffin always had a good relationship in Cleveland, which made Griffin’s comments to Sports Illustrated even more surprising. It will be interesting to hear what James has to say about this when he’s asked about it. 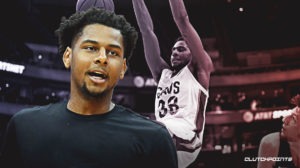