In his 15th season, Cleveland Cavaliers star forward LeBron James is still playing some of the best basketball of his career.

According to Basketball-Reference, James now has 11 career games in the NBA Finals with at least 20 points and 10 assists, which has pushed him to have more than Hall of Famer Michael Jordan and Golden State Warriors All-Star point guard Stephen Curry combined at this stage of the postseason.

James has been able to have his way against the Warriors with no true answer defensively for him as he’s able to dictate the shots that he wants along with playmaking to find teammates. Much of this comes in the way of him being able to get to the basket either in transition or off the dribble. He has been the sole driving force offensively for the Cavaliers in the first two games that has helped keep his team in the position to challenge against Golden State’s talented roster.

The 33-year-old is also just one 20-point, 10-assist performance behind Hall of Famer Magic Johnson for the all-time mark since 1984. The fact that James has been able to nearly double these type of outings that Jordan had (six) in his NBA career does speak highly about not only his play on the floor but nine NBA Finals appearances. It’s also one of those records that only strengthens his legacy.

With James continuing to play at a high level, he could either tie or pass Johnson for that all-time mark in this year’s NBA Finals. Nonetheless, this just further demonstrates the type of all-around unique talent that he possesses that makes him a difficult cover for any opposing defense. 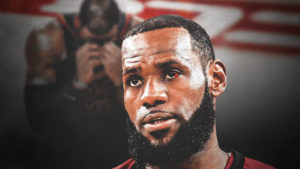