The Cleveland Cavaliers are finally on the win column after defeating the Atlanta Hawks 136-114 on Tuesday night. This was also the Cavs’ first game without former head coach Tyronn Lue, who was abruptly fired last Sunday. Instead, interim coach Larry Drew was in charge of calling the shots. Coincidence?

Most people would probably point to the coaching change as the reason for the Cavs’ changing of fortunes, well, particularly for this game. However, Cavaliers center Larry Nance, Jr. isn’t buying any of that, and refuses to throw shade at his former coach.

“With this win, it doesn’t take anything away from Ty,” Larry Nance said per Joe Vardon of The Athletic. “First and foremost, we still feel the same way we feel about Ty. Hate to see it and everything. It was just as a team. I think it was more so in the locker room than it was … we’ve had two days with LD. I don’t know how much coaching you can get done in two days so I think it was more so a locker room effort and the guys in here that really decided to bring it together and pull it together and that’s not to slight either LD or Ty. But think it was the locker room that won this game.”

While the Cavaliers players are still expressing their love for their former coach, it seemed like his dismissal sparked something within the team as they looked like they were playing with a chip on their shoulder throughout the contest. The Cavs were noticeably more aggressive on defense and these led to easier buckets on the other side of the ball as they finished with 13 fastbreak points on the night. It was, as Nance said, a total locker room effort.

Nonetheless, there still seems to some turmoil within the Cavs organization. Interim coach Larry Drew is disappointed that the front office has not formally offered him a restructured contract. Moreover, their All-Star big man Kevin Love is out indefinitely and may miss weeks due to a foot injury.

With all these clouding the franchise at this time, it’d be easy to think that they’d fold further. But with this win, this young Cavs squad showed that they are a resilient bunch. We’ll see if they can keep it going on Thursday when they host the Denver Nuggets at The Q. 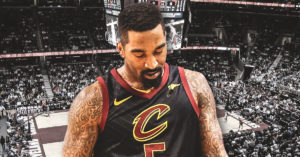