Cavs’ Larry Nance Jr. says ‘nobody’s opinion is more valid than the players’ when it comes to NBA awards Cleveland Cavaliers forward Larry Nance Jr. voiced his opinion on the recent 2019 NBA season awards, saying the opinions of players are being disregarded.

Nance took to Twitter to air his frustrations, pointing out that NBA players should have a strong voice in the process of determining the winners of the annual awards. He insisted that players know who deserve the different awards because they played against each other.

Nobody’s opinion is more valid than the players in terms of NBA awards.. wonder why the ones that actually play against these guys don’t get a vote 🤷🏽‍♂️

Not without Sexton they didn’t 🙄 https://t.co/0TCqv49TSK

Sexton averaged 16.7 points on top of 3.0 assists and 2.9 rebounds in his rookie season. He also played like a veteran late in the season, but it was not enough: He failed to make the All-Rookie First Team. Larry Nance Jr. obviously noticed.

Larry Nance Jr. and the Cleveland Cavaliers fell on hard times last season. Life is unfair in many ways — including professional basketball and its rhythms from season to season. On-court wins and losses are one thing; feeling powerless to have a say in end-of-season awards is another. 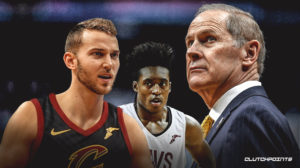