Cleveland Cavaliers forward Larry Nance Jr. is likely to miss Sunday afternoon’s matchup against the Philadelphia 76ers after injuring his thumb against the Miami Heat, according to Joe Vardon of The Athletic:

Larry Nance (left thumb) probably isn’t going to play today, but after that he’s ‘day to day.’ The Cavs play at the Knicks (again) tomorrow night.

However, Nance’s “day to day” status implies that the injury was not as severe as it looked at the time.

Nance stuffed down a thunderous dunk in the third quarter of Cleveland’s game against the Heat, but he immediately departed the game and was later taken to the locker room after clutching his hand.

The 26-year-old was having arguably his best game of the year, scoring 14 points while adding eight rebounds and three steals in just under 23 minutes of action.

Despite the setback, Nance saw a hand specialist and should be cleared to return to action fairly soon, according to head coach John Beilein (via Chris Fedor of cleveland.com):

“He is day-to-day,” head coach John Beilein said. “We held him back today just because he did jam it pretty good. We will just have to wait and see. We don’t expect any huge damage there, but you never know.”

When asked about the significance of the injury, a source texted cleveland.com that the injury was “nothing too crazy.”

While Nance could miss Sunday’s game, third-year Ante Zizic will make his season debut. The strength of this Cavaliers team has been in the depth of the frontcourt, led by Kevin Love and Tristan Thompson.

Nance has become a steady rotation player since coming over to Cleveland in 2018, and the Cavs will hope that he can return in short order. 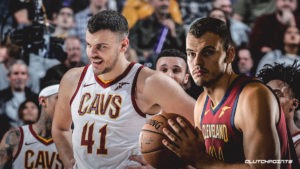