Larry Nance Jr. of the Cleveland Cavaliers called former teammate Ivica Zubac his son and expressed how proud he is of the LA Clippers center. In response to a fan-made video in honor of Zubac’s rise, the Cavs center said:

FINALLY people are starting to take notice of my sons greatness.. proud of you @ivicazubac 😂😂 https://t.co/4hg7zi8Css

To recall, the two were teammates back with the Los Angeles Lakers from 2016 to 2018. During that time, Larry Nance Jr. was already tagged as one of the team’s young core. Zubac, meanwhile, was still in the incubator — steadily developing his game.

One can easily imagine Nance Jr. sharing some lessons to a young Zubac in the Lakers practice facility.

When they separated, Nance Jr. went to Cleveland to help bolster the Cavs. Zubac, meanwhile, would take at least a year to get a shot at some playing time. This year, he proved that he was not just another seven-footer who decided to play basketball for the simple fact that he towered over everybody.

He proved that he’s a skilled big man with infinite potential. Especially during his time with the Lakers this season. After a bunch big nights, Zubac received comparisons with Lakers legends of the past. Though done in jest, it’s an indication that fans saw something special in the 21-year-old. That’s why a purple and gold fanboys lashed out on the front office after they traded him away. 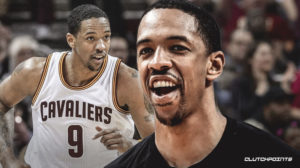