Cavs’ Larry Nance Jr. headed to the locker room after injuring hand from a transition dunk Cleveland Cavaliers forward Larry Nance Jr. was forced to return to the locker room after apparently suffering a hand injury following a transition dunk on Thursday night. The Cavs dunk specialist had his thumb wrapped prior to the start of Cleveland’s matchup with the Miami Heat.

#Cavs Larry Nance Jr., who has been incredibly active tonight, is in a lot of pain going to the bench after a transition dunk. Nance came in with his left thumb wrapped. He's headed back to the locker room with trainer Steve Spiro.

Larry Nance Jr just threw down nasty dunk and is holding hand, bent over in obvious pain. On bench being examined.

Nance has been one of the more effective bench players on the Cavs roster. Through 10 games, he was averaging 9.0 points and 6.9 rebounds on just under 25 minutes per night.

The Cavs acquired the 26-year-old from Akron at the trade deadline in 2018 with the hopes of surrounding LeBron James with more athleticism and playmaking. Nance was a key rotation player down the stretch, but his playing time faded during the playoffs.

The bouncy Nance–who competed in the 2018 Slam Dunk Contest–is making strides in multiple areas this season. Despite ceding some playing time to rookie Darius Garland and a healthy Kevin Love, Nance is shooting a respectable 37 percent from beyond the arc on 2.7 attempts per game while also posting his best defensive rating thus far.

Cleveland continues to rebuild behind their backcourt duo of Garland and Collin Sexton, but they have gotten some strong play from frontcourt players such as Nance, Love and Tristan Thompson. In fact, the Cavaliers are 4-6 to start the season and are currently seventh in the Eastern Conference.

It is unlikely that Cleveland will be in the mix for a playoff spot come April, but they would surely be glad to hear that Nance is not seriously injured. 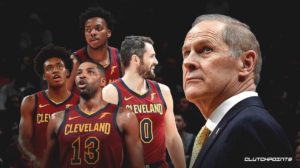