When Tristan Thompson signed that five-year, $82 million deal with the Cleveland Cavaliers three years ago, there was a lot of pressure on the big man to perform at a level that was proportionate to the amount of money he was being paid.

However, despite helping the Cavs take home the championship that same year, critics continue to doubt Thompson’s worth up to this very day. Teammate Larry Nance Jr. is having none of it, and he has gone out to defend his brother-in-arms.

An impressive workout video of Thompson has been making its rounds on social media recently, which led to a Twitter user questioning why the former fourth overall pick failed to bring this type of intensity to the table when it mattered most. Being the model teammate that he is, Nance immediately backed his fellow Cavalier by explaining how he believed Thompson succeeded in playing the part that was demanded of him.

Where was all this effort and shit when Lebron was here. He actually look like a decent basketball player in this video https://t.co/FEvWhuv97p

As a basketball player you should know that sometimes you’re asked to check your ego and play a role that’s best for the team. He’s been PERFECT in his role for years now, leading to a championship in 2016. Can’t knock a guy for wanting to expand his game.. https://t.co/n0DzJjgNxJ

Nance does make a valid point here, as Thompson was never really the star-type to begin with. Aside from his hustle and tireless work on the glass, Thompson’s passion and intensity are also what make him such a crucial part of the team.

The frontcourt duo of Thompson and Nance is something the Cavaliers faithful will be looking forward to seeing this upcoming season. Although undersized, these two more than make up for it through their grit and athleticism. 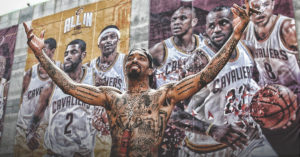