In a phone interview with Kelsey Russo of The Athletic, Nance talked about Gobert’s test and being diagnosed with Crohn’s disease at the age of 16:

“You’d hear every now and again somebody say like, ‘Oh we’re blowing this out of proportion, it’s not that big of a deal.’ And for me, it was like, ‘What?’ This is a huge deal,” the Cavs forward told The Athletic in a phone interview. “This is something that we’ve really got to take seriously.”

“That was actually pretty terrifying,” Nance said of Gobert’s positive test. “They were still coming out with information about it. Yeah, I was scared for myself and my teammates, obviously. It was one of those that just kind of had to sit back and kind of wait. Like, all right, we’ll find out in a little bit if I start coughing or something, that like it’s probably not great.”

Nance is donating $50,000 each to the Greater Cleveland Food Bank and Akron-Canton Regional Food Bank amid the coronavirus pandemic. The Cavs forward is an Akron native.

Nance began this NBA career with the Los Angeles Lakers. The Cavs acquired him at the 2018 February trade deadline and signed him to an extension as well.

Since coming to the Cavs, Nance is putting up 9.6 points and 7.7 rebounds. 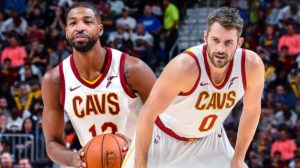