Cavs rookie point guard Collin Sexton has shown flashes of the talent he possesses through the early stages of this season. However, there are some who feel that he isn’t distributing the rock as much as he should be.

Sexton has excellent ball-handling skills and a smooth stroke from the perimeter, but his assist totals have been low on far too many occasions.

Following Wednesday’s 110-99 loss to the Charlotte Hornets, Cavs head coach Larry Drew noted that Sexton will need to improve in this department:

“A good game versus a bad game should not be predicated on your points and how many points you score, how many shots you make,” Drew told cleveland.com after Wednesday’s loss to the Hornets. “You have to do the other things to affect the game and impact it. And that’s an area where he has to grow.

“He’s got the speed, he’s got the quickness and every night it’s not going to be a scoring night. … That’s just something that a young point guard has to learn. I know how much he wants to score but that’s a side that he has to learn. He’s gotta be very receptive to learning that side of it.”

Sexton, who recorded 11 points, three assists and three rebounds against the Hornets on Wednesday, says he’s still going through the learning process:

“Everything is a learning process,” Sexton said. “I felt like I ran the scheme pretty well and certain drives I wish I had back, but just flow of the game.”

"Everything's a learning process."@Cavs rookie Collin Sexton shares his thoughts on the momentum swing, Kemba's hot night in Charlotte and contributing outside of the score column. pic.twitter.com/kQ0LsmogTg

Sexton, who was selected with the No. 8 overall pick in this year’s draft, has made 32 appearances with the Cavs this season (22 starts), racking up averages of 15.0 points on 44.2 percent shooting from the field (40.3 percent from beyond the arc), 3.0 rebounds and 2.5 assists in 29.7 minutes per outing. 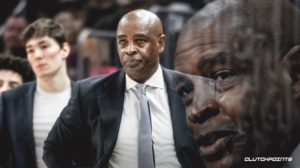