Many of the Cleveland Cavaliers’ younger players don’t have the experience of winning that helps an NBA team become great, but with the recent return of Kevin Love and the ability to play in closer games have helped them turn a corner. Speaking to The Athletic’s Joe Vardon after the teams 112-107 win over the Memphis Grizzlies last night, he specifically credited the ability to play in close games as a reason for how young players like Cedi Osman and Colin Sexton can grow and learn.

“Being in close games like that is very beneficial for both guys,” Drew said, while also discussing how the crunch time situations will help them learn how to win at the NBA level. “The more they are in that type of situation the more they will learn from it. Tonight I thought they really played well going down the stretch. Collin came up with that huge rebound at the end. Cedi hit a big 3 going down the stretch.”

Drew also went on to discuss how being in more of these situations will be great learning experiences for the players, even should the team lose.

While the Cavaliers beat the Grizzlies, the team itself is still sitting squarely at the bottom of the NBA standings, currently third worst with a 14-46 record. Should the team continue to win some of its final games, it might just play itself out of a chance for a top draft pick, but will also likely be doing a great service to its young players.

Either way, the team looks to be in a much better position with the return of Love, and the Cavaliers finally seem to be playing like the team they thought they would be at the start of the season. 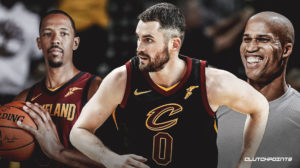