Report: Larry Drew could get interim tag removed by Cavs down the road With the firing of Tyronn Lue, the Cleveland Cavaliers’ front office has promoted assistant coach Larry Drew to be the interim head coach. Drew could get the interim tag removed down the road if the team steadily progresses through the season, though he’s hoping for a commitment now.

Drew finally got a big break in 2010 when the Atlanta Hawks signed him to a head coaching job. His three-year stint with the Hawks all ended up with winning records, 128-102 overall, before the team’s failure to go deeper in the playoffs led to his dismissal.

Then the former NBA point guard was offered a coaching stint by the Milwaukee Bucks, where he spent a forgettable year of leading the team to a lowly 15-67 record. In 2014, he was hired by the Cavs as an assistant coach and was promoted to the position of associate head coach in 2016.

When Lue was sidelined late last season with medical issues, Drew led the Cavaliers to an impressive 8-1 record. 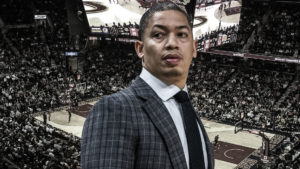 JUST IN: Tyronn Lue thanks Cavs for the opportunity in gracious statement after firing
Related TopicsCavaliersLarry DrewTyronn Lue