Former Cleveland Cavaliers superstar point guard Kyrie Irving had high praise for Cavs 2018 eighth overall pick Collin Sexton, saying that he is “a really good player.” Despite absolutely crushing Sexton in their first encounter against each other, Irving, now with the Boston Celtics, still had some good things to say about the 19-year old point guard.

According to Joe Vardon of The Athletic:

Irving said he’s been a fan of Sexton’s since high school, and he had nice things to say about the Cavs rookie. He said Sexton is “a really good player,” “very talented,” and “head of the franchise now, along with Tristan (Thompson) and Kevin Love.”

“Obviously I’ve been doing a little studying as well and just waiting for that moment to play against a young guy like that,” Irving acknowledged.

Irving showed no mercy, dropping 29 points on Sexton as he led Boston to a 128-95 victory over the Cavaliers. He also shot 11-of-15 from the field and made five 3-pointers in just three quarters of play.

Even though he may have demoralized the rookie’s spirits with his performance, Irving’s postgame praise for Sexton may be enough to boost his confidence back up. Irving might have just been reciprocating Sexton’s aggressiveness, as the youngster tried to bring it to the former Cavs star point guard. Unfortunately, he was just outclassed by Irving. Sexton finished his night with 15 points, four rebounds, and four assists, but shot just 6-of-18 from the field.

Sexton is now sporting Irving’s previously worn No. 2 Cavs jersey. But it looks like Irving has no hard feelings regarding that following his postgame compliments of the 19-year-old rookie. Or maybe he does — and he’s just showing it on the basketball court. 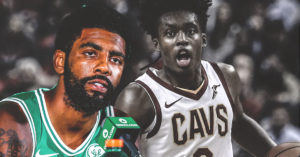