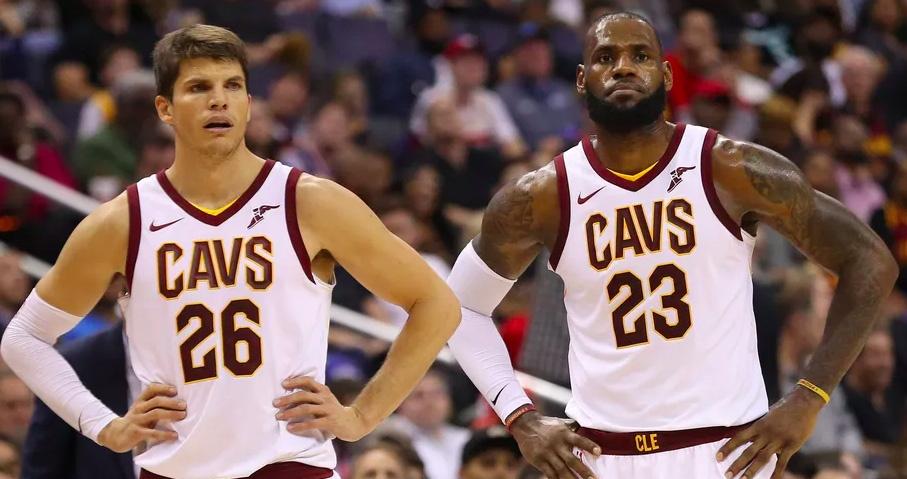 Kyle Korver, one of the greatest marksman the NBA has ever known, had high praise for LeBron James’ 3-point shooting in the Cavs’ 119-109 win over the Nets on Wednesday night.

After a sluggish first half, one in which he posted just 10 points, James decided to remind us all why he is still considered the greatest basketball player on Earth. “The King,” as James is known, finished Wednesday night’s game with 33 points on 11-of-17 shooting from the field (4-of-7 from downtown), six rebounds, five assists, and two steals. However, it was his fourth quarter onslaught that impressed Korver the most.

In less than four minutes of game time, James torched the Nets for 18 straight points. Basically, everything was falling — pull-ups, step-back threes, left-handed layups… you name it. He went on to score 23 points in the final quarter.

“Man… it’s amazing,” Korver said of James’ performance. “My man has worked his way into becoming a shooter, and that’s a scary thing. He works at it really hard. He works on his technique and shot attempts at practice. He’s very focused. When he’s knocking down that three-ball and that step-back, it just opens everything else up for him. He’s so hard to guard.”

What was it like to watch LeBron drop 23 in the 4th? Ask another of the sharpshooters on his own squad, Kyle Korver. #NETSonYESpic.twitter.com/nbGjEBZ63j

Kyle Korver, who finished Wednesday night’s game with 12 points on 3-of-7 shooting from the field (2-of-7 from beyond the arc), three assists, three rebounds, and one block in his 28 minutes of playing time, says LeBron James is doing a nice job of mixing up the pace.

“He can really shoot,” Korver said of James during his locker room interview. “His fundamentals, he’s worked on it. I just think his shot is really, really good. You can tell he thinks about it. He studies the game, studies his own mechanics, and he puts in a ton of time. He’s confident shooting that shot.

“I think he’s doing a good job of mixing up when to attack the basket and when to shoot,” Korver continued. “He knows when his shots gonna be there and when he needs us to take it. (His shot) looks really, really great to me, and I study these things.”

When Korver is impressed with your shooting you know you must be doing it right, @KingJames. 👀

James and the Cavs, winners of six straight games, will be back on the floor this Friday, when they’ll serve as hosts to the Charlotte Hornets. Tip-off is scheduled for 8:00 p.m. EST with Fox Sports Ohio, Fox Sports Carolinas, and NBA TV having live broadcast coverage. Fans who plan on attending are asked to wear black for the Cavs’ #BlackOutTheQ event.