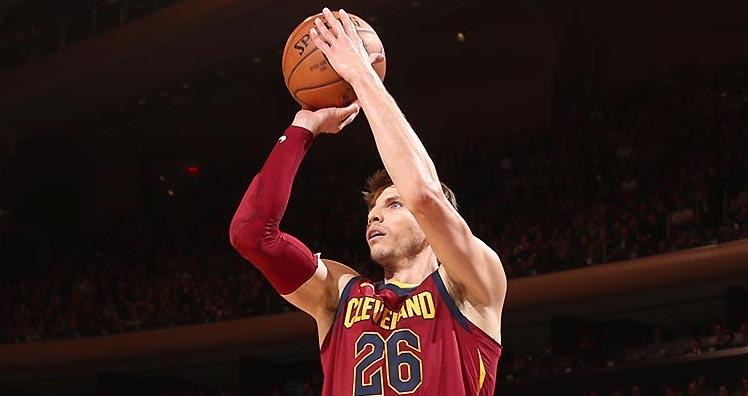 With his first made bucket from beyond the arc in Monday night’s road game against the Minnesota Timberwolves at Target Center, Cleveland Cavaliers sharpshooter Kyle Korver passed Boston Celtics legend Paul Pierce (2,143) for the No. 4 spot on the NBA’s all-time 3-point field goals made list.

.@KyleKorver has just passed @paulpierce34 (2,143 3FGM) for sole possession of 4th all-time on the @nba three-pointers made list. #CavsWolves

Without question, Korver, now 36 years of age, will go down as one of the best shooters in NBA history. The former Creighton Blue Jay holds career averages of 10.0 points on 44 percent shooting from the field (43 from beyond the arc), 3.1 rebounds, and 1.8 assists per game.

Former Sixth Man of the Year and NBA champion Jason Terry (2,224) is currently ranked third on the all-time 3-pointers list. Indiana Pacers legend Reggie Miller (2,560) is ranked second, but it’s former champion with the Celtics and Miami Heat in Ray Allen (2,973) who holds a firm grip on the number one spot.

Korver has become a favorite among Cavs fans — and for good reason. The streaky shooter has bailed the Cavs out of several sticky situations. In his 39 games played this season, he’s turned in averages of 9.9 points on 46.2 percent shooting from the field (44.1 percent from downtown), 2.0 rebounds, and 1.0 assist per game. His instant offense off the bench has been so useful for coach Tyronn Lue, seeing how well Korver ignites the Channing Frye-proclaimed ‘Dinobots‘ lineup.

For the most part, the Cavs rely on their long distance marksman s evidenced by their 32.8 attempts average from beyond the arc per game — good for third most in the NBA — making Korver such an excellent fit and an important weapon for Cleveland.

Join us in congratulating Korver on this prestigious achievement.