Kyle Korver, who was traded to the Utah Jazz earlier this season, sees great things ahead for Collin Sexton with the way the rookie approaches the game.

“He has a desire to be great. He’s got a huge motor. You take those two things, those two ingredients, and you can become something,” Korver said, per FOX Sports Ohio.

"He has a desire to be great."

Korver has split his time in half this season with the Cavs and Jazz. So far, he’s averaged 7.8 points and 1.7 rebounds per game while shooting 44.5 percent from the field and 42.3 percent from beyond the arc. He’s added much-needed spacing for the Jazz as they try to return to the playoff race in the very deep Western Conference.

Sexton was drafted by the Cavaliers with the eighth pick of the 2018 draft. Coming out of the draft, the Cavs knew Sexton was a raw prospect and would need some work moving forward. But they didn’t expect him to score so well early on even with Cleveland having so little talent around him.

He has proven that he can score when it matters, but he needs to improve his playmaking ability. Only more reps and experience within coach Larry Drew’s offensive schemes will help him further develop as a more complete player.

The Cavs are 8-30 on the season and currently sit 15th in the NBA’s Eastern Conference. 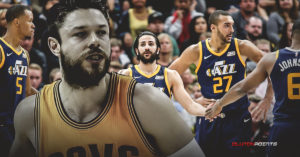