Cavs general manager Koby Altman knew that Darius Garland would pair nicely with Collin Sexton after watching him sink a series of 30-foot jumpers with ease during a recent workout session.

The Cavs selected Garland, now 19 years of age, with the No. 5 overall pick in Thursday night’s draft. The Nashville native was a highly-touted prospect, but there was a bit of uncertainty around his draft stock, as he missed quite a bit of time at Vanderbilt due to a torn meniscus.

In his five appearances with the Commodores, Garland racked up averages of 16.2 points on 53.7 percent shooting from the field (47.8 percent from beyond the arc), 3.8 rebounds, 2.6 assists and just under one steal (0.8) in 27.8 minutes per outing.

Some experts and analysts thought Cleveland’s selection of Garland was a bit strange, as the team had just taken a point guard in last year’s draft (Collin Sexton). However, newly-appointed head coach John Beilein could choose to play Garland and Sexton together in what would be a formidable backcourt set.

“The motivation is to give coach Beilein young talent from the start to develop those guys and we want to utilize coach Beilein right now and give him youthful guys that he can develop right now,” general manager Koby Altman told cleveland.com Thursday night. “That’s the motivation to bring in three first-round picks.”

Whether or not the Cavs will deploy Garland and Sexton in the same backcourt set remains to be see, but it certainly sounds like it’s a possibility. 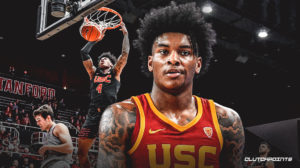